The concept of DanceBlue started as a request from the late Jarrett Mynear as one of his final wishes. Jarrett was diagnosed with Ewing’s Sarcoma at age two, had his leg amputated at age three, and then was diagnosed six times with various forms of cancer by age thirteen. After much time spent in the Pediatric Oncology Clinic during his battle with cancer, he challenged his family to “do 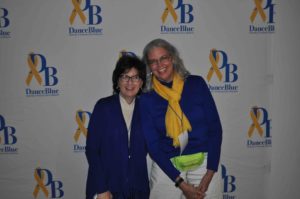 something” to help improve the experience that patients and their families had in the clinic. As a result, his mother, Jennifer Mynear, and Susannah Denomme started DanceBlue right after his passing to fulfill this wish.

Mynear and Denomme started meeting with interested students about this concept of a dance marathon in 2004. By 2005, the first leadership team was developed, and the first marathon was held in 2006. The name “DanceBlue” was developed by Amberlee Isabella, who was the Dancer Programming Chair in 2006 and the Overall Chair in 2007. “At the time, ‘LiveBlue’ was a popular tagline from Men’s Basketball Coach Tubby Smith. I thought ‘DanceBlue’ was simple, strong, and a verb that really started to paint a picture of our marathon,” said Isabella.

The first DanceBlue was planned by a small Committee led by Overall Chair Emily Pfeifer Uhlir, Mynear, and Denomme, and the marathon had about 170 dancers. The Programming Committee worked together to create fun ideas, music, and the first Line

Dance to pass the time, and the Family Relations Committee involved the kids and families to keep the right priorities during the long 24 hours. That first marathon was not all smooth sailing, however. Denomme said, “That night, we ran out of everything – food, snacks, craft supplies. But working together, we went shopping throughout the night and kept everyone fed and motivated!”. Despite this minor setback, the dancers had a blast, vowing to return next year. In addition, they massively exceeded their original fundraising goal of $20,000 to raise $123,323.19!

Since that first marathon, DanceBlue has grown and changed radically through so many memorable moments. In 2008, the first mini marathon was established at Lexington Catholic High School and inspired the 37 mini marathons we have currently. In 2012, the marathon had to be cut short for the only time in DanceBlue history because of hazardous storms and tornado warnings. “I’m extremely thankful that it at least took place because I really don’t know how the direction of my college career and my professional life would have gone if it hadn’t happened. I even remember how some students spent the first twelve hours standing and dancing in their dorms because they wanted to say that they did it!,” said John Graeber, the current Golden Matrix Fund Advisory Council President and former Operations Chair. In 2013, DanceBlue was named the eighth largest 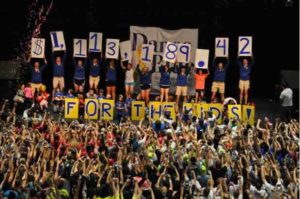 collegiate fundraising event in the nation and announced that $1,113,189.42 was raised, the first time a million dollars was raised in a year. In 2016, the first Silent Auction outside of the marathon and the first UK faculty and staff mini marathon were held. In 2017, DanceBlue fulfilled a pledge of $1 million to open the new DanceBlue Kentucky Children’s Hematology/Oncology Clinic, doubling the size of the previous space. “This was a game-changer for the doctors, nurses, staff, patients, and families, as well as for us as an organization. It allowed us to have a seat at some tables that were not possible before,” said Isabella. In 2018, the organization moved its office space to the new Gatton Student Center and started a $2 million endowment called the UK Distinguished Professorship in Pediatric Hematology/Oncology to provide funding for a full-time pediatric oncology researcher. Last year, DanceBlue raised a record-breaking $1,880,954.88, which brought the total amount raised to over $15.3 million for the kids!

The entirety of DanceBlue’s history has shaped the organization to become what it is today. However, the founders could never have expected it to become what it has. “What DanceBlue has become is bigger and better than anything in my wildest dreams! I 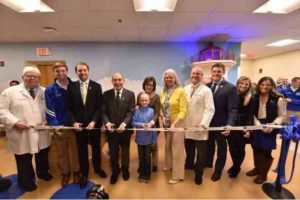 never doubted that the students could create something special, but the impact it has had on countless people, from the pediatric oncology patients and their families to the students, the community, the University of Kentucky, and beyond, is phenomenal,” said Mynear.

DanceBlue has no plans to stop its growth here. This year has already been filled with adding new Committee positions, implementing positive changes to DanceBlue events, and so much more. In addition, DanceBlue 2020 will be bigger and better than ever, and this organization will continue to grow for many years to come. “I think the future of DanceBlue will be getting more students involved in the fight against pediatric cancer and growing space for treatment for the DanceBlue Clinic. Because DanceBlue has been proactive with future goals and ensuring the money raised would always be used wisely and in accordance with our mission, largely due to the creation and development of the Golden Matrix Fund, I’m confident that there will always be advocates for DanceBlue inside UK 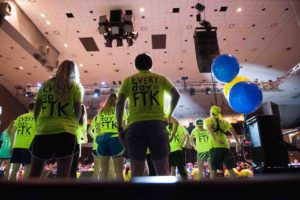 Healthcare and the University of Kentucky. Because our Mini Marathons have grown exponentially throughout the state of Kentucky, hundreds of incoming freshmen each year choose UK because of DanceBlue. Their passion that is being cultivated right now in high schools and middle schools will fuel this organization for years to come,” said current Overall Chair Sally Martin.

Through all of the growth and change, DanceBlue has not lost sight of its original purpose: to be for the kids. Mynear said, “All of Jarrett’s short life, he focused on what he could do for others, through Jarrett’s Joy Cart or just by connecting with others to show them that he cared and he wanted to make their life a little better. DanceBlue is the epitome of this”.