The 2014-2015 school year was the inaugural for Lafayette High School DanceBlue. Alex Francke, a Lafayette and University of Kentucky graduate and the current Miss Kentucky, proposed the idea of starting a mini marathon to the Head Coordinator of LHS Student Council, Ms. Sophie Schwab. From there, they planned the event and fundraised the best they could for the school’s 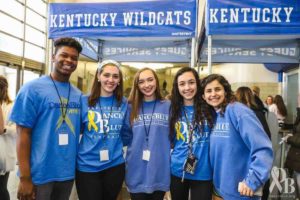 first DanceBlue mini. The mini had over 100 students in attendance and sparked Lafayette’s lasting love for the cause. Now, Lafayette DanceBlue is one of the school’s most anticipated events of the year, raising $26,372.19 last year and $87,675.92 since its start!

The school as a whole prepares for and participates in the event. LHS Student Council is made up of four committees, the largest of which is entirely dedicated to DanceBlue with over 160 members. There are also three DanceBlue Co-Chairs, Ashley Grospitch, Sofia Minor, and Mary Beth Matocha, that hold the committee meetings, plan all the details of the mini, reach out to community partners, fundraise, and promote the mini in any way they can. “Raising over $26,000 takes time, dedication, and patience- and we are so lucky to have a student and head council willing to put forth the effort to make our DanceBlue as successful as it has been,” said Schwab.

The committee has been putting forth the effort, with preparations for this year’s mini starting in August. So far this year, the 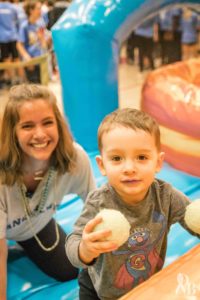 committee has hosted Homecoming with proceeds benefiting DanceBlue, helped with the Bourbon Chase by running the Stock Exchanges to raise money, and sold merchandise to fundraise and advertise for DanceBlue. In the upcoming months, they will be hosting a pancake breakfast fundraiser, having bake sales, writing fundraising letters, and doing much more to raise as much money as possible for the cause. “Every cent counts. Hosting small (and large) fundraisers throughout the year allows us to fundraise over time, which is key. Our main fundraising tactics include utilizing social media, giving out fundraiser dates well in advance, and organizing events in our community,” said Grospitch.

All the fundraising and planning efforts will come together at this year’s mini, which will be held on January 25 from 6pm-12am. There will be many activities during the entirety of the event, including a performance of the line dance at the top of every hour, inflatables, obstacle courses, cornhole, a table to write letters to children in the clinic, and lots of food. There are also performances from the school’s dance team and step team, a lip-sync battle, a dance glow party, and, of course, the reveal of the total amount of money raised over the past year. This year, they expect to have about 1000 dancers in attendance! “Lafayette High School’s mini marathon is a memorable one each year. They have so many students show up full of energy to support the kids. 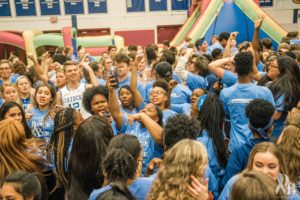 It continues to blow me away each time I go,” said Mini Marathons Chair Allie Holt.

Preparing for and attending the mini is definitely tons of fun, but the students have not lost sight of why they are putting in so much effort. “As a group, we have discovered it is more rewarding to serve rather than be served. We have stayed involved so that we can better educate the school environment and community as a whole in regard to pediatric cancer. We care deeply about the kids and want to better their lives in any way possible,” said Grospitch.