DanceBlue is Rooted in the Big Ideas of a Small Boy

Whenever I sit in the stands and watch the line dances at DanceBlue, I can’t help but imagine a certain boy down there in the middle of the action—a boy with a bald head, an artificial leg, and a big smile.

Jarrett Mynear never got to attend DanceBlue; he died before it became a thing. But his spirit is in every detail of this wonderful event.

Jarrett was the most remarkable child I ever met as a journalist. From the first time I saw him on videotape when he was nine years old, I was taken by his charm, wisdom, and positive attitude. This boy, who battled a rare bone cancer, just had a way of dealing with a terrible lot in life that was to be admired. His strategy? Help others and make the most of every day you’re given.

Jarrett became a local celebrity when he decided to collect new toys for the patients at Kentucky Children’s Hospital. Jarrett’s Joy Cart, as he called it, began rolling at the hospital on a weekly basis in 1999. Each patient got to pick a toy from the cart and, more importantly, got to visit with Jarrett, who gave them pep talks and helped them forget their troubles, at least for a while. As he told me, “It’s not so much about the toys. It’s about giving them something to look forward to.”

A feature story I did about Jarrett’s Joy Cart got passed on to the producers of The Rosie O’Donnell Show and, within a week of receiving the tape, they were on the phone with Jarrett’s parents, booking him for a live appearance in New York City. That really put steam behind the cart. In the weeks that followed, Toys “R” Us donated a truckload of toys, a Lexington businessman donated warehouse space, and people from all over the country began writing to Jarrett, telling them how much he inspired them.

Soon, there were spinoff Joy Carts in Louisville, Seattle, Orlando, Saint Louis, and Evanston, Illinois. Jarrett was invited back to The Rosie O’Donnell Show and was featured on Oprah. He began to win national awards for volunteerism and became a child advocate for cancer research. It was amazing how his little idea became such a big deal. It was a story too big to tell in television segments, so it was my great honor to tell it in a book, “The Boy Who Delivered Joy” (Gatekeeper Press, 2019).

Few people knew that as all of these good things were unfolding, Jarrett’s condition was worsening. New tumors showed up in other parts of his body. As he lost weight and grew weaker in the summer of 2002, it was clear to Jarrett, his family, and doctors that time was running out. Jarrett composed a list of final wishes for his parents, things he wanted them to do after he was gone. Of course, “Keep the Joy Cart rolling” was at the top of the list. It’s something Jarrett’s parents, Doug and Jennifer Mynear, and sister Claire, have never let lapse.

The other priority was “Do something to make the clinic better.”

Jarrett had spent countless hours in the UK Pediatric Oncology Clinic, hooked up to intravenous tubes as he received chemotherapy treatments. It was a crowded, gloomy place. Nothing about it made it a pleasant place for a child. 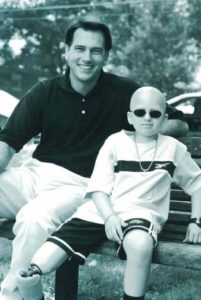 So, just a week after Jarrett’s death, his mother dealt with her grief by checking off the items on Jarrett’s list, and, like her son, she thinks big. Jennifer decided the only way to make the clinic better was to replace it, but that would take millions of dollars. It was too big of a task for one family, but she realized there was an untapped force of thousands of UK students. How could she get the student body involved?

After many brainstorming sessions with Susannah Denomme, who was then the Director of Development at UK’s Markey Cancer Center, the idea of DanceBlue was born.

Thousands of students have called being part of DanceBlue a “life-changing event.” The participants have been inspired to help others and to deliver joy, just as Jarrett did.

That’s why when I see an open space on the dance floor, it’s easy for me to insert a little boy in that spot. He’s present in the smiling faces, tired feet, and giving hearts of each person who gives their precious time FTK.