DanceBlue would not be possible without the efforts of dancers and their teams. One such team that has contributed greatly is Alpha Phi Omega. Alpha Phi Omega, or APO, is a national co-ed service fraternity. The University of Kentucky’s chapter, Alpha Zeta, has had a strong presence both on campus and in the Lexington community since its recharter in 1994. Being a service 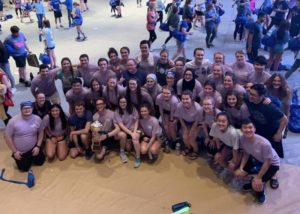 Leading the way in their fundraising and involvement efforts were the team captains, Alex Poorman and Phil Sandman, who have both been a part of DanceBlue for the past two years. Being a team captain entails attending weekly captain meetings, organizing fundraisers, keeping track of the team’s fundraising and spirit point totals, and keeping everyone informed and excited about the upcoming marathon. Poorman said he became a captain for APO because he wanted to let others have the 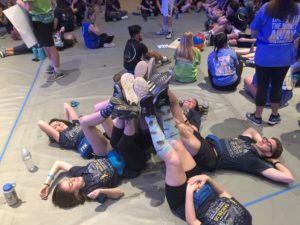 same experience he did in his first year dancing. “It allowed me to support my brothers in APO and bring them to DanceBlue, and bring DanceBlue to them,” he said.

The team also participated in the Adopt-A-Family Program for the first time in 2019. This program allows teams to pair up with a family in the clinic to support them throughout the year. One of the major projects they did to support their family was making 1000 cranes to send positive vibes their way. “It was awesome to be able to provide direct support to a family in the clinic. It definitely made DanceBlue a lot more personal,” said Sandman.

With 42 dancers raising over $25,000 last year, APO had the honor of receiving the FTK Cup, which is awarded to a small team that showed great dedication to fundraising and involvement in year-round DanceBlue activities. “The credit really goes to our team members. I felt every member was passionate about making a difference in the lives of patients in the clinic even though most of 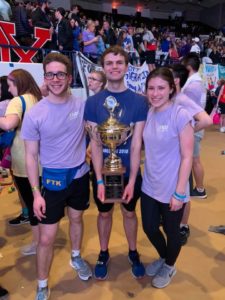 them had never interacted with them before. Their passion and dedication is the reason I believe we won the award,” said Sandman.

Overall, the marathon brought the members of APO together in a different way than ever before. Poorman described the experience saying, “Spending 24 hours on your feet, dancing together for such a cause, crying and holding hands in the final hours, and smiling and hugging after the final line dance really brings people closer together both in that moment and further on through the shared experience”.

Team registration closes September 27, 2019 at 5:00pm. If you want to have an experience like these captains and their Alpha Phi Omega team members, register your team today!