Many of the patients and families served by DanceBlue look forward to summer. Not only because of the sunshine, but also because of Kid Cancer Alliance’s Indian Summer Camp program. Indian Summer Oncology Camp is a weeklong camp that allows kids with cancer to build friendships and focus on just being a kid, rather than a patient. The camp started in 1981 by a dedicated 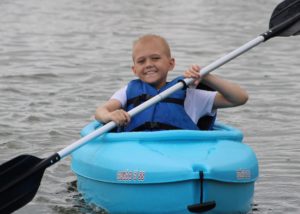 group of volunteers and has since provided thousands of amazing and brave kids with their favorite week of the year.

A typical day at Indian Summer Camp starts with the “Polar Bear Swim”, which is a quick dip in the pool to start the morning off. Next, the campers sing songs, eat breakfast, and listen to the morning announcements. The rest of the morning is Cabin and Camper Choice, which includes activities like archery, kayaking, fishing, and hiking. The campers then eat lunch and alternate between swim time and arts and crafts. To finish the day, the campers eat dinner and then go to a special activity like a campfire, talent show, or the annual camp dance. Each week also includes a field trip day. In addition, nurses, trained volunteers, and a staff doctor are all on hand to make sure that the campers stay safe during the week. As can be seen, Indian Summer Camp is like any other typical summer camp but with campers that have incredible stories to tell and amazing friendships that are built from shared experiences.

Although DanceBlue and Kids Cancer Alliance are two separate organizations, they serve many of the same children and have the same goal of loving kids and their families during what may be their greatest time of need. They both bring joy to kids who deserve a regular childhood, and they both bring comfort to the families who need it. As a result, many of the volunteers at the 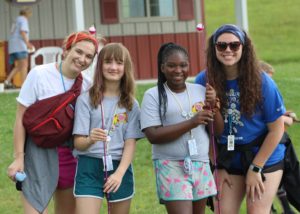 camp are DanceBlue students who want to continue serving the kids all year. “Indian Summer Camp would not be possible without the dedicated volunteers that staff our weeklong camps. We love the energy and excitement that DanceBlue students bring to our camps!” said Shelby Russell, Executive Director of Kids Cancer Alliance and Family Relations Chair of the very first DanceBlue in 2006.

The DanceBlue students would argue that they get way more out of serving at the camp than they give to it. Brothers Grant and Jake Puckett are both DanceBlue Committee members as well as volunteers at Indian Summer Camp. DanceBlue alumnus Grant Puckett said, “While a part of DanceBlue, I was given the wonderful opportunity to serve the kids and their families by raising money, boosting morale, and traveling to Mini Marathons all over the state. All of that was remarkable and very rewarding, but I never had the chance to directly serve these kids until I got to Indian Summer. There, I got to know them. I learned their stories. I learned who they are 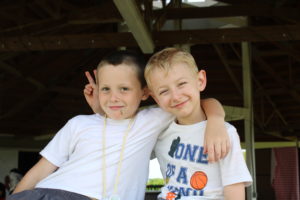 and what made them who they are. There’s no place like Indian Summer!”. Clinic Activities Coordinator Jake Puckett also raved about the camp saying, “I volunteered because it was a great opportunity to continue to grow relationships with the kiddos I may see in the clinic every week and many other kids across the state! I knew going to camp would only strengthen my passion and love for them and DanceBlue as a whole, and boy did it do that and much more for me!”.

Both brothers volunteered for the first time this summer and both said they were definitely going back next summer. That’s the kind of effect Indian Summer Camp has. It provides both the kids and volunteers with the week of their lives. As Grant said, there’s no place like Indian Summer Camp!