There’s Nothing Mini About Mini Marathons

When I was first introduced to DanceBlue, I was a freshman in high school signing up for our Mini Marathon. I had heard it was for a good cause and “everyone else was doing it.” Little did I know that it would only take 6 hours to have me hooked for a 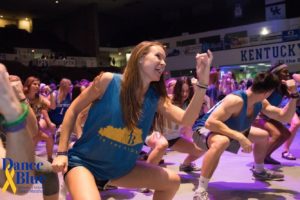 lifetime. By junior year, I was on my school’s DanceBlue committee and even found myself waking up at 5am to get to school by 6:15am for our weekly meetings.  We were fortunate enough to have Erica Shipley, the 2015 Mini Marathons Chair, attend some of our meetings, giving me my first look into the large world of Mini Marathons.

I interviewed for UK’s Morale Committee as a senior in high school, hopeful to gain one of the 48 spots available. Unfortunately, that was not my year, and I ended up dancing with my sorority’s team at DanceBlue 2017. After that marathon, I reapplied for Morale Committee and spent my sophomore year as a Morale leader for DanceBlue 2018. Throughout that year, I developed a strong love for Mini Marathons, attending ~15 just as a committee member. It was a blessing to interview and earn the position as one of the Mini Marathon Coordinators for the following 2018-2019 school year.

Each year, my love for DanceBlue has grown and strengthened in ways I never could have imagined.  Holding the position of a Mini Marathons Coordinator took me behind the scenes of what it takes to organize Mini Marathons with schools across the state 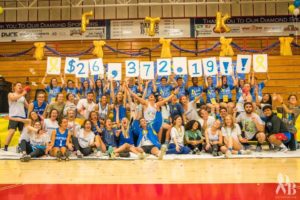 and showed me the tremendous amounts of hard work each school puts into theirs.  Just as DanceBlue is a year-long fundraiser, many of the schools we work with also fundraise and promote their Mini among their own communities for the year leading up to it. This position gave me the opportunity to meet teachers, students, and families from around the state and hear why they DanceBlue.  Hearing some of the personal stories and experiences they were willing to share shined such a light on why Mini Marathons have become such a large piece of DanceBlue. Many of the kids in the Kentucky Children’s Hospital DanceBlue Hematology/Oncology Clinic are kids in these elementary schools, middle schools, and high schools. These Mini Marathons get the community involved and create a huge support system.

Before coming to the University of Kentucky and seeing DanceBlue in action firsthand on Committee and all across the state, I would have told you I dance For The Kids.  While that is still true, it is now so much more. DanceBlue is no longer just an 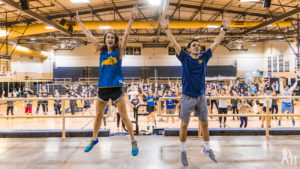 organization, it’s no longer a 24-hour Dance Marathon, and it’s no longer just a Clinic. DanceBlue is a family. It is a family consisting of students that donate their time, communities that give their money and support, and all of the families that encompass the organization.  The time I have spent on Committee and as a Mini Marathons Coordinator has not only impacted my life, but I have been able to see the impact it constantly has on others. Just as a Mini Marathon kick-started my involvement in DanceBlue, I have met many others who began the same way. Over the past seven years, I have witnessed the family that is DanceBlue grow bigger, reach wider, and impact people in unimaginable ways. DanceBlue is not just the name for the organization, the marathon, or the clinic; it is the name of a family that will continue to come together until the battle is won.